By: Dr Scott Weiss – Author of “Confusing The Enemy” The Cus D’Amato Story JULY 2012

First, you must understand that the grand scheme was all planned by the genius of the sweet science: Cus D’Amato.

Dr Scott Weiss authored “Confusing The Enemy” detailing the story of Cus D’amato, he is also a martial artist, owner of Bodhizone physical therapy and wellness and has been the physical therapist for team USA at the Olympics and many other athletes & celebrities.

Cus had worked with so many fighters that, by the time he met Mike Tyson, his formula for making champions, particularly heavyweight champions, was already perfected.

All Cus needed, was a dedicated student who would take in his every word.  Mike was the gifted boy with the spark of interest. As a pudgy, 13-year old, Mike was muscular and weighed nearly 200 pounds. 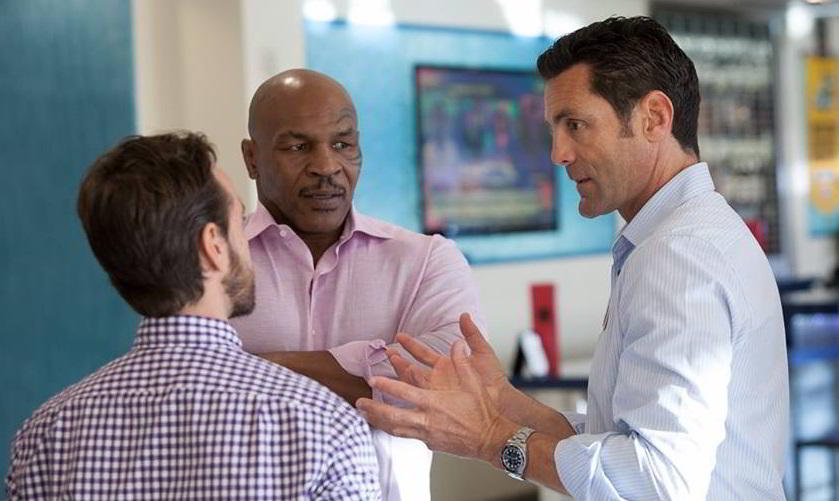 Once he met Cus his whole life changed and he became an exemplary student of the art and craft of boxing.

While serving time at the Tryon School for Boys, Mike began dabbling with weights. Blessed with extraordinary genetics, he used his athletic prowess for his own amusement.

If you are wondering, “Did Mike Tyson lift weights?”, the answer would be yes.

Even as a teenager, without any formal training, Mike was already benchpressing over 200 pounds. 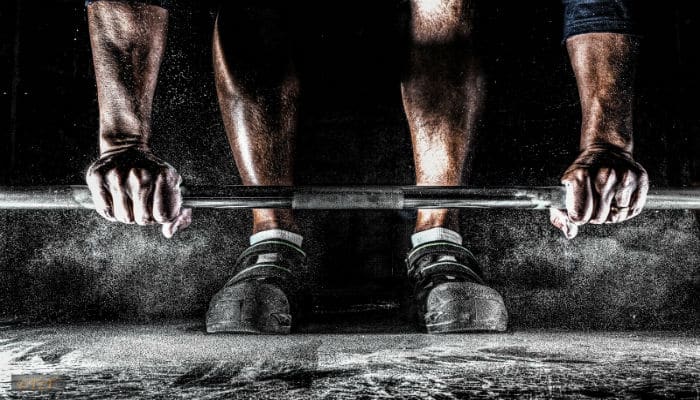 I think most of us know how the Catskill saga panned out, but very few people are familiar with the training regimen that went on in the gym at 422 Main Street or in the big white house on Hidden Drive.

Beginning four or five weeks before a fight, Mike would train 50-60 hours a week, working six days a week.

He would spar 200 plus rounds without headgear because Cus believed that headgear gave the fighter a false sense of security. Mike would drop about 15-20 pounds during training camp. 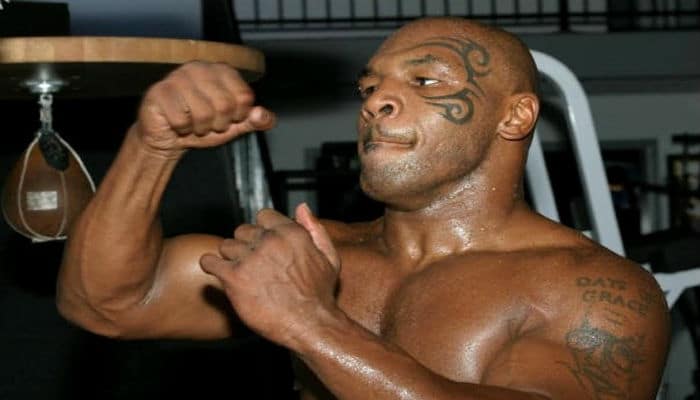 Cus used to claim that “there is no such thing as a natural puncher. There is a natural aptitude for punching and that is different. Nobody is born the best. You have to practice and train to become the best.”

Back in the 80’s, Mike explained that his punching power came from nothing more than heavy bag work, noting how it “works your strength through the hips.”

Despite doing shrugs with a barbell, Mike said that lifting weights has about as much resemblance to punching as “cheesecake.”

Cus realized that, due to Tyson’s style, he needed to have incredible punching power in both hands.  So Cus put Mike on a 300-pound bag, very heavy for a 13-year-old, and told him to work his right and left.

By the age of 18, Tyson was expertly using both of his hands to hammer bags that most other fighters would walk away from, save Marciano.  Cus knew Marciano trained using this technique and was quick to get Mike on the same routine! Eventually, Cus had Mike move on to punching water bags.

While Cus felt this change was important because it would protect Mike’s hands, Mike preferred the water bags because “it feels like hitting a real person.”

Cus also ordered Tyson to jog three miles with 50 pounds on his back because he didn’t want Mike growing any taller, literally trying to stunt his growth. Cus wanted his Sonny Liston! 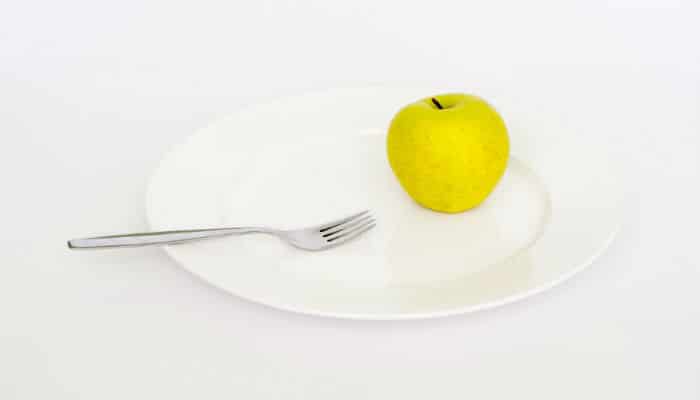 Cus was way ahead of his time with the emphasis he placed on diet and nutrition during training. (If you want to learn more about Cus’ research on diet strategies, check out “Bus & Cus” on the internet.) Back in the 60’s, when he was training Buster Mathis, Cus had developed a steady diet plan which he put Mike on.

The diet called for a lot of protein, carbs, fruit juices, tiger’s milk, protein shakes, and vitamins. Although Camille, Cus’ live-in housekeeper, cooked an assortment of meals, in addition to the ubiquitous steak & pasta, she still caught Mike sneaking a sugary mid-night snack here and there.

Though Mike loved his ice cream, he was usually caught toting around a bowl of Captain Crunch. And even though he trained like a beast mentally and physically, Mike was always cheating; he was after all, human.

10:00 a.m.: wake up and eat breakfast (Oatmeal with fruit, OJ, and vitamins, washed down with a protein shake.)

12pm:  ten rounds of sparring and three sets of Calisthenics.

3pm: another four to six rounds of sparring, bag work, slip bag, jump rope, Willie bag, focus mitts, and speed bag (Cus was never fond of the speed bag) and 60 minutes on the stationary bike.  Three more sets of Calisthenics.

5pm: Four more sets of the same calisthenics routine and then slow shadow boxing or focusing on ONE technique, in order to master the mechanics.

8pm: a light 30 minutes on the exercise bike for recovery purposes only. NO RESISTANCE.

9pm: watch TV or study fight films and then go to bed.

On top of stretching his neck in the ring every day, Mike would also stretch his upper and lower body, (Cus wanted Ballistic Stretching) mainly performing plows, spread eagle, hurdler’s stretch, butterfly, as well as various stretches for the upper body.

A DAY OF REST

Mike took Sunday’s off.  Cus believed in active rest and lots of sleep.  On his days off, Mike would do extra chores around the house, watch old fight films from Jim Jacob’s collection with Cus, play with his pigeons, and sometimes sneak back to his old neighborhood in Brooklyn.

Only negative repercussions came from those trips, Cus and Jose would have traveled to the city to find Mike regularly. They were not always successful. Most of the reports you read on the internet are true, but some of the details have been misconstrued and altered slightly.

Mike told Ian Durke, a Sky commentator, about his workout regime when he visited England to watch a Frank Bruno fight in March 1987. Durke told Mike that Bruno trained like a bodybuilder.

Mike’s opinion on the matter was that floor exercises and natural body weight exercises worked better for the fighter.

Cus has repeatedly told Mike that weight lifting slows you down and that he needs more speed, because “Speed Kills!”  Earlier in his career, Cus trained Jose Torres to throw a 5 punch combination in two-fifths of a second.

There was only one man, besides Cus, able to time Jose’s punches and obviously proved to be true.  Mike was just as fast, for a heavyweight, throwing a four-punch combo in under a second. This was part of the Peek-a-Boo style, speed.  Later in Mike’s life, he did more traditional weight training.

Remember, “Boxing is a contest of character and ingenuity. The boxer with more will, determination, desire, and intelligence is always the one who comes out the victor.”  It’s not all about training –Cus

Scott is a licensed physical therapist and board-certified athletic trainer based in New York. He is also a registered exercise physiologist and strength and conditioning specialist with over twenty years of experience.

Scott is a martial arts practitioner and instructor holding a black belt in both Tang Soo Do and Daito Ryu Aikijujutsu. He also has experience as an amateur boxer in many tournaments in the tri-state area. He was a part of the USA Sports Medicine team and has trained at the NCAA, Olympic and major league levels.

He is the owner of Bodhizone Physical Therapy and Wellness. We have 4 clinics in New York (Grand Central, Astoria, Bayside & The Hamptons) and provide care to everyone at a level that Olympic athletes receive. The services we offer are physical therapy, chiropractic, acupuncture, yoga, massage and more.

If you’re looking to build yourself up as an athlete, why not take personal training from us? Where better to train than a place that has built up professional athletes to the highest degree.

If you’re looking for a service we can provide for you and you’re in New York, then please contact us on 212-529-5700. Or you can fill in your details on our contact page and we will get back to you.

Bodhizone is dedicated to mending and promoting the mind, body and spirit through the use of integrative physical therapy, exercise science and sports specific applications while incorporating a balance from the healing and martial arts of the far east.

Let us know, how we can help and we’ll be in touch.